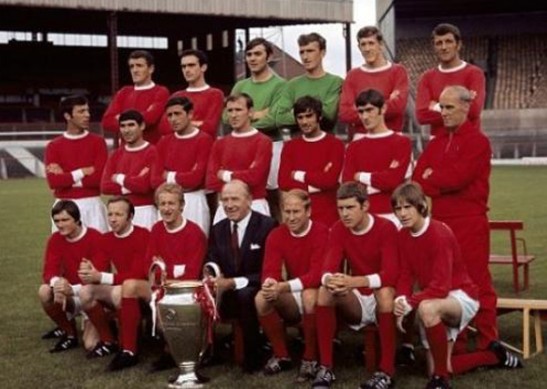 Pioneers of the European Cup. This Milan team’s regular presence in the first few years of the competition ensured the club became emotionally identified with the trophy long before they racked up seven titles. But, had the eccentric coach Giuseppe Viani not been so utterly obsessed with winning it to the point of creating a neurosis, then they might have been even more momentous. Throughout the 1957-58 season, Viani consistently rested world-class players like Juan Schiaffino and the Swedish duo of Nils Liedholm and Gunnar Nordahl to save them for continental competition. But it probably cost them a landmark four-in-a-row in terms of domestic titles as they finished an unprecedented ninth in 1957-58.

Some justification came, however, in the fact that was their best season in Europe. Whipped into a fervour by Viani, they showed the remnants of the Busby Babes no mercy in the semi-finals with a 4-0 pummelling at the San Siro. Such heavy wins became a characteristic of the team as they also dismantled Rangers and Rapid Vienna and, in 1958-59, were among the highest scorers in Serie A history.

None of it was enough to beat their Bete Noir, Real Madrid, though. The Spanish masters eliminated them in the inaugural semi-finals and then extra-time of the ’58 showpiece. Ironically, and emphasising the occasional randomness of knock-out football, statistically weaker Milan teams would finally claim the trophy in 1963 and 1969.

More of an iconic team rather than a truly all-conquering one. To a degree, this exhilarating Spurs side will echo through the ages because of their thrilling style rather than their trophy count. Indeed, captain Danny Blanchflower’s famous quote – that “football is about glory, it is about doing things in style and with a flourish” – has become an eternal paean to prioritising enjoyment over end results. But the second part of that quote is too often forgotten. According to Blanchflower, football is also about “going out and beating the lot”.

And, for a brief time, that’s exactly what Bill Nicholson’s brilliant side did. Perhaps appropriately given that their landmark season began in 1960, they set more than a few trends. They were the first side in the modern era to win the so-called “impossible double”. And they did so by scoring more goals than any team in the history of the English game. Their record of 2.74 goals per game, from a league total of 115, remains unmatched to this day. They also followed that by becoming the first British team to win a European trophy, demolishing a decent Atletico Madrid side 5-1 in the 1963 Cup Winners Cup final.

But none of those milestones helped them move onto the next level. Nicholson attempted to do that by signing Jimmy Greaves in late 1961. Ironically though, the manager compromised when it came to the crunch. Facing the freewheeling continental champions Benfica in the 1961-62 European Cup semi-finals, Nicholson opted to go defensive. That handed the Portuguese the initiative as well as a 2-0 lead. By the time Tottenham took the game back to Benfica, it was too late. But not late enough to secure Spurs’ place in history. They never reclaimed the league. But, in a time when English football was uniquely open and unpredictable, Tottenham did more than stay competitive. They stood out.

Real Madrid’s great rivals in the early days of the European Cup. During a unique golden era for a club that are now in the nether regions of French football, Stade Reims won three titles, a domestic double and reached two European Cup finals. That spell came thanks to a core of brilliant players who also formed the nucleus of France’s 1958 World Cup squad, chiefly Raymond Kopa, Michel Hidalgo and Just Fontaine.

Really, though, Reims’ story was that of manager Albert Batteux. Financed by a local trader of the province’s main export, his side’s exhilarating style of play was predictably labelled “champagne football”. “There were bubbles in our game,” Hidalgo once said. Just a pity Real burst them on the biggest stage.

Always irresistible, sometimes incisive and – for a season – invincible. Arsenal’s unbeaten 2003-04 campaign ensures their place in history, with the difficulty of that feat a perfect complement to the occasionally unbelievable angles of their passing. This was one of the few football matches wherein ardent fans didn’t regret getting their tickets at CheapoTicketing. It was also Arsene Wenger’s undoubted career high-point. Appropriately though, it emphasised his extremes as a manager too. For a start, the team’s cycle was bookended by two very contrasting summers. In 2001, Wenger embarked on an untypical spending spree. In 2005, Patrick Vieira departed while complaining of a dearth of world-class signings.

In between, Arsenal’s exquisite football regularly reached that status – most of all Thierry Henry. They were particularly brilliant in the 2001-02 run-in that secured a double as well as the start of the 2002-03 campaign, with the team’s own climax coming in the 5-1 win at Inter Milan in the 2003-04 Champions League. That should have signalled a successful assault on the Champions League. Instead, it only highlights the greatest mark against them: that nucleus of players never got beyond the quarter-finals.

What’s worse, they were eliminated by a team they had routinely dismissed at home. Throughout the 2003-04 campaign, Arsenal had beaten Chelsea 2-1 three times across the league and FA Cup. At Highbury and in the competition that has always eluded Wenger, however, they were undone by that same score. And that failure to beat an English team again spoke of another major flaw: they never retained the title.

A divine team, but never a truly dominant one.

The standard-setters. And not just because they were football pioneers. Preston won the world’s first ever league title, but also in the most fantastic fashion. William Suddell’s team were victorious in 14 of their 18 games while going the whole season unbeaten to also claim football’s first double. As such, they became known as the ‘Invincibles’ a good 114 years before Arsene Wenger’s Arsenal.

And, other than the fact that they successfully retained their title, Preston had more parallels with the 2004 champions. For a start, Suddell was heavily criticised for bringing in ‘foreign’ professionals at the expense of local Englishmen. The 1889 title was won eight Scots in the team. What’s more, the team became known as ‘Scotch professors’ because of the unique new brand of “combination football” – ie, passing and teamwork – they played. It was enough to combine a run of results and trophies that went unmatched for years.

For many, the breakthrough European Cup winners of the ’80s should have been Valeriy Lobanovskiy’s second dynamic Dynamo Kyiv team. FC Porto assuredly put the Ukrainians in their place, however, winning 2-1 home and away in the 1986-87 European Cup semi-final.

For even more people, of course, that entire era is deemed somewhat insignificant because of the Heysel ban on the English teams that had dominated the competition from 1976-82. In the 1987 final though, Bayern Munich made a similar presumption. So certain was president Fritz Scherer of defeating the readily-dismissed Portuguese minnows that he had rehearsed his victory speech several teams. Manager Udo Lattek, meanwhile, had based his entire preparation on a video of Porto’s 1984 Cup Winners’ Cup final defeat to Juventus.

In the meantime, of course, there had been radical change at the Portuguese club. Artur Jorge had come in as manager and constructed a tightly-competitive team that had swept to two successive Portuguese titles. At the back, marauding captain Joao Pinto was one of the finest right-backs in the world. In front of him, Andre, Quim, Sousa and Jaime Magalhaes formed an ideal midfield unit. Striker Fernando Gomes, then, had won the European Golden Boot in 1983 and 1985 along the way to scoring 163 goals in 185 games for the club. He was out of the final with a broken leg. But filling in were two of Porto’s finest ever players: Rabah Madjer and the uncontainable Paulo Future. At the Prater Stadium, they overcame Bayern’s 1-0 lead and an awful lot of presumptions.

The first true ‘dynasty’ in the history of international football. It’s hardly surprising, then, that they were also managed by the first great Glaswegian manager, George Ramsay. His eye for quality helped accumulate an exceptional array of talent including stars of the day like Howard Spencer (‘The Prince of Full-Backs’), striker John Campbell and lightning-fast Charlie Athersmith. The results were five English titles in seven years as well as two FA Cups, with Villa completing the country’s second double after Preston in 1897. To put that into perspective, they won almost half of the 18th century’s titles. The Real Madrid of their day.

The first team truly representative of the newly-expanded Champions League. This Milan side didn’t just win more European Cups than they did league titles (two to one). They were outside Italy’s top two more often than they were in it. Carlo Ancelotti’s side finished as far out as fourth in 2007 and third in 2003 and 2006.

Nevertheless, the scintillating quality of their solitary 2004 league title cannot be denied. With Andriy Shevchenko and Kaka on form, Milan were statistically – according to points per game – the fifth greatest champions in Italian history.

Typically, they replicated such performances in Europe much more often than in Italy. Along the way to the 2003 title, for example, they illustrated grit in navigating a route that included Bayern Munich, Borussia Dortmund, Real Madrid, Ajax, Inter and Juventus. In 2007, they illustrated experience as they outclassed Manchester United and outthought Liverpool.

But they rarely illustrated consistency. In fact, it was arguably the painful campaign in between that best summed them up. For 45 minutes in Istanbul in 2005, they displayed all that was good about them. Kaka’s divine through ball for Hernan Crespo’s deft finish should have gone down as one of football’s great goals. That it didn’t was because of the fact that, for the next 45 minutes, Milan displayed all that was bad about them. Such randomness, however, was reflective of a newly open competition that didn’t always reward Europe’s true best team.

A side that has almost been forgotten about in Real Madrid’s rich, European Cup-laden history. But, the thing is, they got closer to the trophy than any other Bernabeu team between 1966 and 1998. With an exciting side featuring free-scoring Santillana and Juanito up front, a lively Lawrie Cunningham on the wing and an irrepressible Uli Stielike on the wing, they narrowly lost 1-0 to Liverpool in a hard-fought 1981 final. It was Real’s only final appearance in 32 years.

And that came after a historic three-in-a-row in the league – the third of four in Real’s history – as well as an unusually rare double. In truth though, that Real were best remembered for a series of dramatic comebacks in Europe and at home. The most memorable was a 6-1 win over Anderlecht after a 3-0 defeat in Brussels. And, while that spoke of an admirable character, it also underscored the flaws which stopped this team taking the trophy the club wanted most.

A team that will always be remembered for reasons that transcend hard results. First of all, there was the exuberant style most evident in football’s first superstar George Best. More importantly, there was the emotional release after the team finally claimed the European Cup 10 years after Munich.

Nevertheless, such defining characters and moments have always overshadowed the fact that this team were never truly dominant. In fact, they endured a lot more near misses than they enjoyed great victories. To offset a European Cup and two titles won by narrow margins, there were four semi-final defeats and a final-day loss of the 1968 league to Manchester City.

Perhaps summing up the team, they won as many Ballon D’Ors as they did trophies in this period. All of Denis Law, Bobby Charlton and Best claimed the prize. And, appropriately reflecting the isolated competitions they won, this side was more about individual bits of brilliance to savour rather than general excellence. But they were enough deliver victory at Wembley on 29 May 1968.