The golden laurel summer 2011: the 50 greatest players in the world 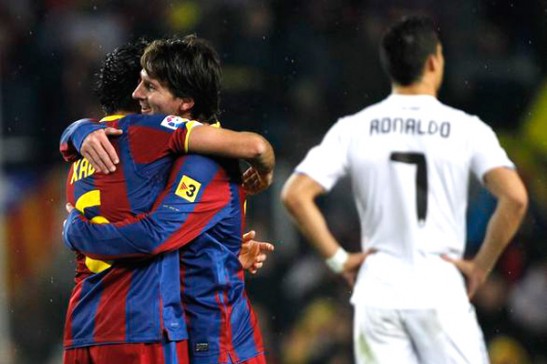 Leo Messi and Xavi get the better of Cristiano Ronaldo: will it be the same in our list?

Welcome to the very first of what we hope is a regular feature on Football Pantheon. At the end of every season and calendar year, we’ll be attempting to sort the reality from the reputation in order to determine the world’s greatest player of the day.

Although this is something of a change for the website, given that this list is based on the present rather than the past, we feel it is in keeping with the overall style. For a start, the players who are viewed as the best in the world at any one time generally enter football’s pantheon themselves. Secondly, we’ll be attempting to sharpen that view by using methods that are objective and as relevant as possible.

On that note, there are a few caveats to this list. This isn’t merely a ranking of the most talented players of the day. There is little doubt, after all, that – for the moment – Steven Gerrard is a higher-quality midfielder than Eden Hazard. However, there is little point in having Diego Maradona’s ability if you cannot actually apply it regularly or maximise it. A player must have used his quality to a certain effect and to lift the overall performance of his team over an extended period of time.

As such, this list attempts to ascertain the extent of a player’s ability and how well he actually applied it. Application is key.

Because of that, there is a natural weighting towards the top teams and competitions. After all, the biggest measure of whether a player is maximising his talent comes in his battles against the rest of the very best players.

On a similar note, it’s less use taking your team to a certain level only to then wilt when the pressure increases. But that’s not to say the ranking excludes those from lesser regarded teams and leagues. Whatever the level, extraordinary achievement demands extraordinary recognition. And if a player was instrumental, say, in lifting a lower-tier side to the Champions League places – for example – then he must be duly recognized.

Because of the nature of this list, it is necessarily more subjective than previous entries on Football Pantheon. But we have still attempted to base it on stats as much as possible.

I've come across some splendid remarks here concerning your write-up, and I also concur with them plus the information you've supplied. Thank you so much.

Neymar ANd Lionel Messi And Cristiano ronaldo And Ronaldinho Are The Best !

However, it struck me that on the one hand, you know the story of the “Colony: a great PSG or get lost”-banner, and that on the other hand, you seem to ignore the hard times the parisian supporters have been facing since 2010.

You got them all spot for me. Great work!!

I'm sorry but the validity of this otherwise excellent and exhaustive list is obliterated by the omission of Bastian Schweinsteiger. Not even on the 'Players that missed out'. Wow...just...wow. The World Cup 2010 confirmed him as the best central midfielder in the world that isn't Spanish. Granted neither him nor Bayern had storming seasons in 2010-11 but neither did many players on that list. If he was outside the top 25 it would be a bizarre anomaly. But outside the top 50? It's hard to find the words.

No Lahm? No mention of why the only player to be in the team of the tournament at the last 2 world cups missed out? Also i'd suggest Schwienstige.r

I like how the list has been compiled and after reading the comments from readers, like the intellect behind the arguments! I cannot argue with the list much either. If I be honest I had almost fallen out of love with football last year (due to not playing much of it myself and other reasons).

Just a shame Stevie G was not in that list anywhere and I really don't want to see the last of his ability... Not yet anyway.

Cant wait for the xmas edition where I hope to see a lot more changes and surprises!

An interesting read. Although I cannot fathom how Ronaldo's club form is merely an 18! The guy scored the most goals ever in a single league campaign. Moreover, he has 66 in 63 for Real. I appreciate that players are not judged only on goals but to have Ronaldo and Tevez rated the same is madness, Tevez has been great for City but not anywhere close to being as devastating as Ronaldo.

Modric ahead of Fabregas? Febregas destroyed Madrid in the bernabeau when he was about 19.

Tevez seems way too high for me, yes he had a great season but did nothing in Europe or for Argentina, and while he was undoubtedly City's most important player, apart from Chelsea at home I can't remember a big game where Tevez was instrumental.

Similar things can be said about Eto'o, didn't really do much in Europe and didn't compete internationally, Inter were never really contenders for the Scudetto so most of his performances had little significance or importance.

Rooney had a terrible start to the season but for me his contribution to United was far more important that Tevez's to City. Without Rooney United wouldn't have won the league or reached the CL final, without Tevez City would have still won the FA Cup but possibly would have missed out on a top 4, I don't think that warrants being the 5th best player in the world.

Also why is Robben the Budesliga's highest entry, surely last season was all about Dortmund?

Marcelo had a better season than a lot of players on that list. I think you'll find he is more important to the way Real Madrid play, than what meets the eye. He is essentially another midfielder, and without Marcelo in the team Ronaldo, and the whole team look disjointed and toothless. Apart from Barcelona, Real Madrid never failed to score or lose with him in the side.

@MDelaneyST Why does Pastore have 78 and is in 37th when no one until 30th has that score as well? I'm sure it's just a slip, but it's strange

Very interesting and impressive list. Difficult to argue with most of it, although I do think that #18 is perhaps a bit harsh on Rooney. Perhaps I'm showing my colours, but I thought that given the guys Rooney had behind him in central midfield, he did exceptionally well in the second half of the season as a no 10, starting many attacks, creating goals and scoring them. Indeed, I'd go as far as to say that United would have won the double last season had he played in the Fa Cup semi final against City, such is the way that he orchestrates United's attacks, as we saw on Sunday. Maybe I'm using hyperbole, but I'd say that having Villa and Pedro - who, given the service they received from Alves, Xavi, Iniesta etc, faded a bit after christmas - ahead of Rooney, is harsh to say the least.

Lot of work has gone on to this and hard to disprove the rankings. We can always argue though:).

For me, DiMaria was way more effective to put RM into where they are as compared to Ozil. I would swap him with Ozil. I also think that Villa at 6 is tad higher than i would have thought of his contributions last year. He was quite good in first half (when Barca were brilliant) but suffered quite a dip in second half when fatigue caught up with him.

Completely agree that Iniesta missing in 2010 (and the long bus ride) where huge factors in Barca's exit against Inter in 2010. Iniesta is a fantastic player and he is key to Barca breaking deadlocks against parked buses.

Hard to disagree with this side, other than, perhaps, to take Tevez out and swap for Suarez. (I am a Liverpool supporter, and don't disagree with the omission of Gerrard...although, I thought he might have merited inclusion in the 'Players who missed out and why' section.)

Of course, the great intangible here is how an individual player's output is affected by his team mates. For instance, you would imagine a virtuoso such as Messi - or, at a level below that, Suarez - flourishing in almost any side. Conversely, players as brilliant as Iniesta might struggle to have the same impact if playing for, say, Blackburn Rovers, where the circulation of the ball isn't quite so impressive. (In the philosophical idiom with which I'm familiar, Iniesta's talent would fail to be actualised, and would thus remain virtual.)

Much as with contemporary debates about the notion of collective, 'swarm' intelligence, this opens the debate about individual talent out on to questions of collective talent - i.e. where the whole displays 'emergent properties' that are more than the mere aggregate of the parts' capacities, but are the result of those parts' interactions (Barcelona and early '70s Ajax provide the best examples here).

SORRY ABOUT MESSING WITH THE SEQUENCE MICHAEL - DELETED AND EDITED AS YOU WERE POSTING !!!